As Camp Sisco was in session, The Birds, their friends and I went off to karaoke at Second on Second (Second Street, Second Avenue in the East Village). Aptly-named, this is our second choice for a hot spot for warbling as the drinks are easily 2x the cost that they are at The Carriage House, the denizens less amiable/eclectic, the seating options more limited and the songs aren’t free.

While otherwise unremarkable, the escapade warrants a blog post due to the KJ’s (Karaoke Jockey) recent implementation of a new statute for singing order. Apparently, they think it’s more fair to not sort the list of singers based on the order they’re received (as The Carriage House‘s Sisco Kid prefers), but rather shuffle haphazardly based on group. This means, fellow crooners, that if you arrive at 9pm with a party of 5 people, and a half hour later, 5 more people join your party, one of the newcomers can sing nearly immediately, and you would need to wait until one member of every other group has sung before another member of your party can sign. Feasibly (as with the case tonight), it would take four hours for your chance at the mic.

Case and point: Mike and I arrive at 10pm. The Birds arrive 10 minutes later and put a song in. Fifteen minutes after that, one of them sing. At midnight, I approach the KJ to see the song list and find that Mike is 23rd in line (and I’m 28th). Judging that a song and preparation is roughly six minutes. The 20th singer would perform roughly two hours from that point, meaning that I would be singing at 2:48am. Granted some people might grow weary of the four hour wait and leave, the chances of me singing before 2am were still slim to none.

Sisco Kid’s logic is simple. The order you submit your (free) tickets, is the order you sing. If you put in more than one, your second ticket goes to the top of a second stack keeping you in roughly identical rotation as the rest of the crowd. If the wait is 45-minutes for you, it’s 45-minutes for everyone else that put the same number of songs in (no matter what time they arrive). Second on Second’s new policy dictates that while someone may wait an hour to sing, those in smaller parties wait substantially less—EVEN if they arrived an hour later than you did. And, naturally, in extreme cases such as the one I was a-party to, you wind up waiting 4-hours and 48-minutes.

Mathematically, the solution is simple. Get your money back and leave. It makes your party smaller, increasing their chances to sing, and decreasing others’ opportunity for mic-time. You may also decide to go with a party but sit independent, thus being a party of one. Theoretically, if there’s 10 parties in the room, Second on Second’s logic would mean you sing 1-in-10 times (where if there were 10 parties of 10, you’d sing 1-in-100 times).

Our solution was to leave and rejuvenate our allegiance to The Carriage House where buybacks are plentiful and you’re not subjected to the hell that is the new Second on Second rotation policy.

Interesting side-note: There was a bachelorette party that was dressed like nuns, singing (obviously) faith-based songs. Take a look at the second snap below of them singing “Faith” by George Michael. I’m not certain what that strange blur is on the right of the group. Could it be that J.C. joined in for a little post-W.H.A.M. rockin’? Eerie. 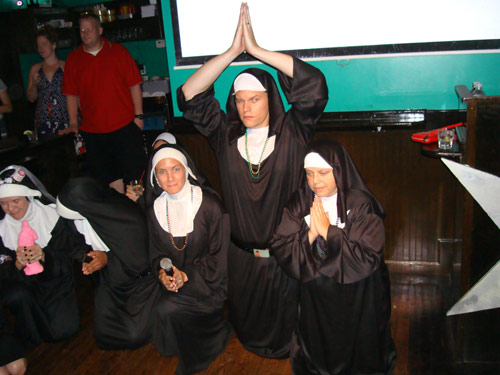 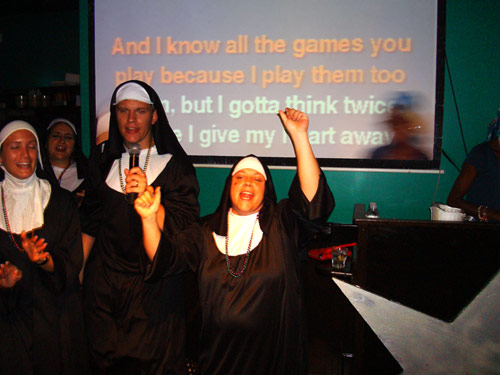 (Yes, the big nun is a dude, and  all of them have broken their vows of silence)