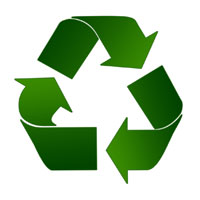 This is what prompted me to write them back in 2005, and to resend my letter on the four-year anniversary of it’s lack of a response. The impetus, during the financial peril of the MTA on its second “doomsday” as the news calls it, was hardly to assist with their near bankrupcy. I had, in fact, included an optional method of creating an additional revenue stream four years ago. But please note that this was not my primary goal.

However Mr. Howard H. Roberts, Jr., ever the ecologically concerned businessman, rejected my suggestion on the basis that it wasn’t financially equitable. Its a wonder that the President of the MTA, who believes so firmly in pursuing financial interests solely, has found himself in Doomsday 2: Electric Boogaloo.

Anyway, below is a copy of my 2009 revised letter to Mr. Roberts, as well as a scan and re-keyed version of his response. If anyone has a method of getting in touch with Rubbermaid or another canister distributer, and/or advertisers that are interested in attracting new audiences (carpoolers, commuters, businesspersons, metropolitans, cosmopolitans and East Coast enthusiasts), please drop me a line and perhaps we can create enough clout to circumvent CBS Outdoor and prove Mr. Roberts and his wallet-minded response incorrect.

This is a copy of the letter:

I’ve lived in the NYC Metro area for only the last nine years. In the time that I’ve been here, I’ve noticed a slew of amazing improvements made by the MTA to help our city as well as the environment.

Your core business is a service that has sheltered New York from a number of harmful ecological issues. You transport eight million people a day and nine billion people a year, saving our environment from countless carcinogens, pollution, smog and acid rain. Metro-North and Long Island Railroad platforms are outfitted with recycling bins and buses incorporate your Clean Air Technology. Your labors to be a national leader in Planet-Friendly concerns are unparalleled.

I’d like to make a suggestion that would enable you to continue this practice in other areas. It’s an opportunity that, if implemented correctly, would pay for itself and may even provide profit from an additional vertical.

Upon waiting on NYCT Subway platforms and peering down into the tracks, I see an unprecedented amount of discarded batteries.  These batteries are one of the worst offenders to our environment as they contain metals, acids and other compounds that, when released into the environment, cause harmful effects. And as personal computing, music players, organizers and gaming equipment gets more portable, accessible and inexpensive, this problem will increase as well.

My suggestion is that we sit down with a receptacle producer (Rubbermaid, etc.), your ad sales team, The Department of Sanitation and Environment-Friendly organizations to create a new process for the MTA. Subways could be equipped with canisters, perhaps strapped to trash cans or I-beams that have small openings in the top to fit batteries. This would be similar to the recycling boxes currently on above-ground railroads. Manufacturers of these receptacles will surely get a tax write-off for donating them to the MTA, as well as amazing PR and the opportunity to showcase their brand on the top (free advertising). Then, we sell ad space on the sides of the canisters to local and national businesses, as trash cans throughout New York currently do (see Receptisign, for example). The opportunity for this ad space for businesses is undeniable with the amount of people you service daily. The Department of Sanitation (or MTA trash handlers would be able to unlock the canisters and collect the batteries for recycling. Activists could assist in weekly or monthly collection as well.

With free materials, advertising opportunities and pre-set processes for collection in place, the case for creating a new profit vertical is likely. A new precedent would be set for mass transportation businesses and government agencies to follow in the MTA’s lengthy strides for a greener earth. It is a win-win situation for everyone!

I’d be happy to sit down with you to discuss this idea further and help with organization, implementation and follow-through. Please call or email if you have any questions. I look forward to speaking with you and making this idea a reality.

Thank you for your time and interest.

And below is a copy of their response, as well as a scan of the letter:

Re: Suggestion for Discarded Batteries on Subway

This is in response to your recent letter in which you proposed that we consider installing special canisters int he subway to collect discarded batteries for recycling. You also proposed generating additional revenue from the sale of advertising space on these canisters.

Our advertising contractor, CBS Outdoor, has explored this idea in the past with no palpable success. The only groups that have been even remotely interested in this type of advertising were non-profit agencies looking for free advertising opportunities. Based upon this experience, we do not believe that the installation of battery collection canisters would provide any appreciable advertising revenue.

Thank you for taking the time to write, and for your interest in helping us to improve our financial posture. 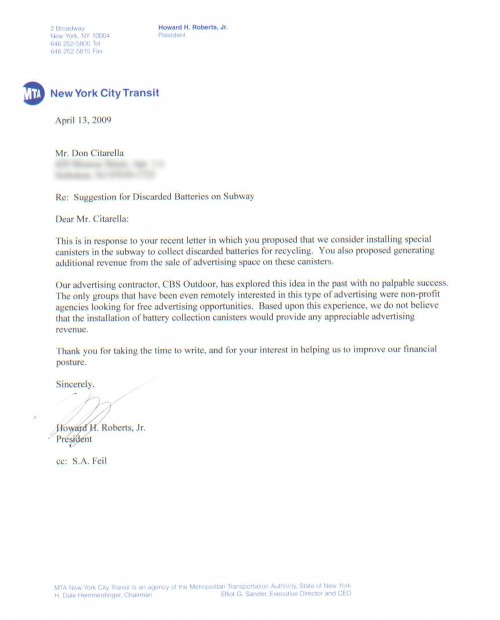