This Saturday, I finally got the chance to visit the 9/11 Memorial at the World Trade Center construction site. The week of the attacks, all my friends and family expressed a desire to help with the rescue effort at Ground Zero. Because I lived in NYC at the time, I was lucky enough to be able to do something.

Exactly 10 years, 10 months and 10 days from the date of the attack (or 3,966 days), I walked through the memorial and tried to remember how I felt the last time I stood on those grounds (Remembering 9/11). Devoid of the fire engines and dump trucks and firefighters and volunteers (like myself), and the massive, smoldering pile of rubble, there was a feeling of calmness that overtook me. The seemingly endless sea of names around the reflecting pools helped put into perspective what I’d seen that day. Quickly, I calculated that the number of tourists around me was probably close to 3,000—the number of people who died in the attacks. I tried to wrap my head around the understanding of how many people had perished. All of us, I thought, would be dead.

And while I expected a more solemn feeling among the people around me, it occurred to me that these people—like the nearly 400 new trees of the memorial—were alive. And after 10 years, we were finally celebrating life again. It wasn’t their deaths that we remembered, but the vibrancy of their lives and the regrowth that was nurtured over the last decade. I saw dozens of children younger than 10-years and wondered what the memorial would mean to them, having been born after September 11th. I saw tourists from different countries with their heads bowed, in contemplation or prayer, and I wondered how differently the memorial could affect them.

I asked a friend, Justin, where he was when the attacks occurred. He said he was in health class, sophomore year of high school, and he watched the towers fall from the classroom television; a virtually endless loop on the morning news. His answer was remarkably similar to my mom’s answer when I asked her where she was the day that Kennedy was assassinated.

I walked with my brother and friends to show them the spot where I spent the greater part of the day working, piling hundreds of bags of debris and garbage and expired rescue equipment for disposal. Mike snapped a photo in the exact location I was standing (seen above and below) and I struggle, even now, to connect the two pictures in any semblance other than geography: the tone, the emotion, the people, the color, they’re all so very different. 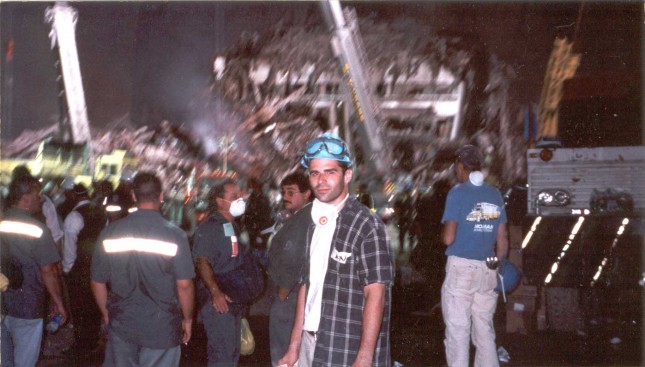 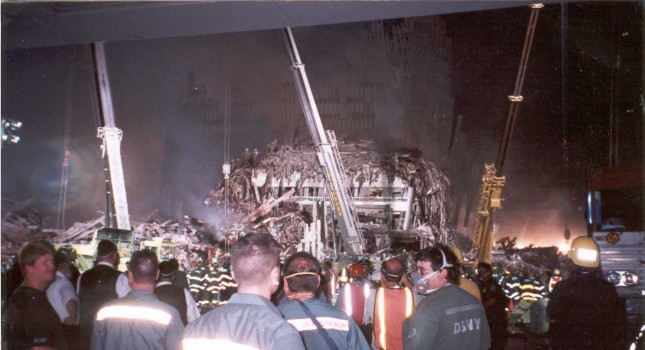 I look forward to taking my family to the memorial someday and learning from them what they were thinking. I wonder if they’ll ask me where I was during the attacks, as I had with my mother, or why this seemingly arbitrary spot on the edge of the grounds remains so important to me. I hope not to lose my memories from a decade prior, and that the pacific feeling of renewal grows stronger with the trees and children that I walked among this weekend.