As my studio works with creatives for design and development, we often send archived resources through email. Up until recently, I always just thought that my developers were more organized and less rash than my designers. However, last week I learned that I’d mistaken a bug in Microsoft Outlook as creative absent-mindedness.

Monday, I received a .zip file from a designer and, again, noticed that he didn’t provide any notes or information as to how I should be implementing the contents, what had changed with the previous version, and any other pertinent information. He’d done this before so I just chalked it up to the quirkiness of another creative. Certainly, I’ve been guilty of the same.

But then I realized that his email had no signature, either. If signatures are automatically inserted into new messages, why did he deliberately remove it. This made me curious, so I dropped him a line and asked him if he would humor me in a little experiment.

Somehow I must have piqued his interest, as a few minutes later both emails arrived. In the email where he included the inline attachment on the top, all content below the .zip file was removed from the message body. In the second example, all content (instructions, signature, and attachment) were included.

The support technician revealed that there is a bug in Outlook 2007+ that automatically truncates any messages following an inline attachment. He goes on to show his incompetence and arrogance (in the classic and, unfortunately, telltale fashion) by recommending users tell their senders to open Terminal on their Macs and enter the string that effectively disables inline attachments. And while this may assist proficient users from disabling all inline attachments (including images, which for the most part, should be showing inline in the age of HTML emails), it also presumes that I’m going to call my great aunt and walk her through this process before she wants to send me a recipe or a .zip archive with pictures of her many cats (dramatization, above).

Naturally, this is a cop-out answer and though the Microsoft technician indicates that the issue has been elevated, it is still unresolved. The post, by the way, was from May 2011.

My recommendation in the interim is to have my creatives always drag-n-drop attachments to the bottom of emails and try to be more aware of messages with attachments but without signatures. As to why my developers never seemed to have this problem? Well, it has nothing to do with creative absent-mindedness. It turns out that most of them are using PCs.

Here’s a handy reminder for you to share with your friends and colleagues. 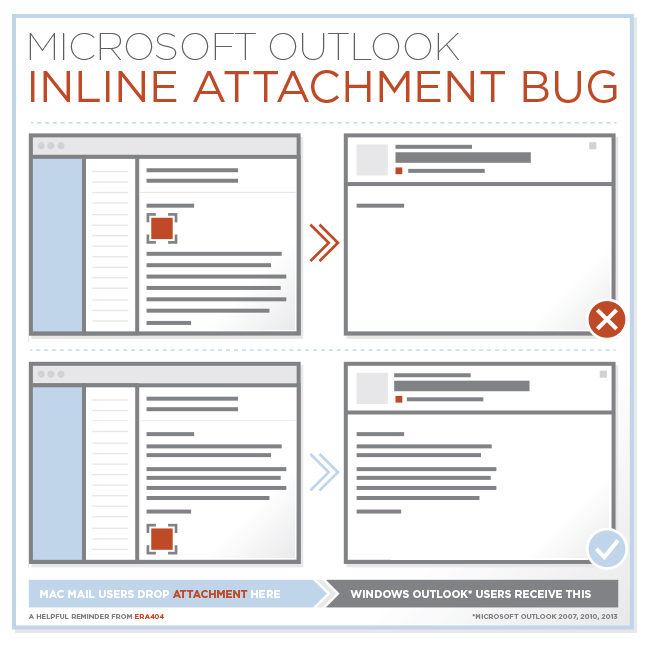