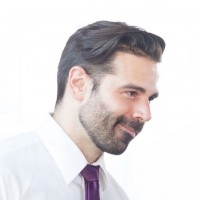 As an entrepreneur, Don Citarella has founded multiple successful businesses, and has been the driving vision behind numerous profitable products designed to make the client’s life easier such as Bulc Club, Lyrek Contact and Events Management System (CEMS), Musikal Chairs and MediaPASS (Project Asset Sharing System). As a highly-awarded creative, he is a trusted source for both industry-specific publications like Communication Arts and mainstream media outlets like The New York Times.

He is currently the President and Creative Director of New York City-based, multi-disciplinary studio, ERA404 Creative Group, Inc., as well as the President of Lyrek, Inc., a software company catering to the fashion and PR industries. He oversees a network of 40+ designers, developers and artisans who cater to Fortune 1000 companies seeking a change from the factory-style design of large agencies.

In these roles he serves as the face of his companies, as well as the creative mind behind campaigns for clients such as NBC, The Herb Ritts Foundation, The Target Corporation, Big Beach Films, MoMA, Sanrio/Hello Kitty, Pantone, ASUS and Broadway Video. With a business degree in Visual Communication and a focus on user experience, typography and color theory, Don directs all aspects of ERA404’s print, identity, environmental and new media design.

In the last decade, Don has been recognized by numerous design organizations, including receiving the “Addy Award” Citation of Excellence, the AGC Showcase Award, Golden Web Award and DesignInteract “Site of the Week”. He has been featured in numerous publications, including Communication Arts’ “Insights” column, HOW Magazine’s “Behind the Design” column, The New York Times, and The Wall Street Journal, and was a guest lecturer at The School of Visual Arts and Parsons / The New School.