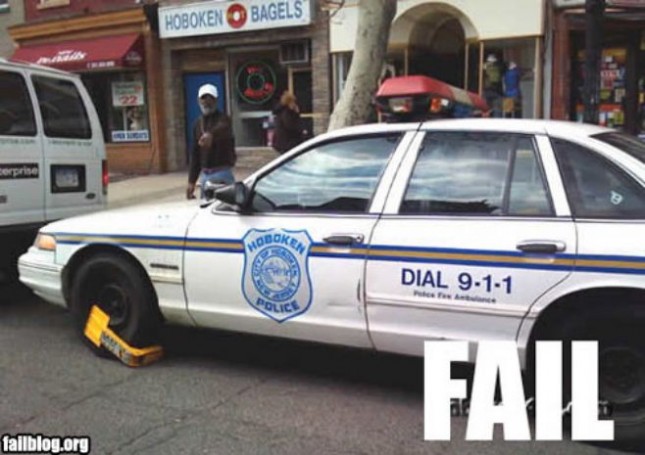 I was excited to see one of my articles was linked on Buzzfeed. While I didn’t take the photo, i’m happy to once again bring Hoboken to the world’s attention. Now I’m wondering the repercussions of linking my name/blog with an article titled “25 People Who Suck at their Jobs.”

If the original photographer is reading this, this honor is yours. Excellent photo, fellow Hobokenite!

As I look back through this blog, I notice a certain theme growing in the general area of customer service issues. I’m sure that everyone has said, at one time in their life, that there should be a list where you can publicly register complaints with problems with bad customer service. These departments are always quick to mention that they’re recording calls for quality assurance and that they want you to hold the line for brief customer surveys, but their intention seems to be more directed toward rewarding their representatives for saving their company’s money by denying discounts and rebates more than it’s geared toward customer satisfaction. In the absence of a definitive online resource for these tirades, I’ve blogged verbosely about issues with a whole host of other problems (Google Voice and Solicitations, Adventures in Small Business Banking, One Voice, A Representative Will Be With You Shortly, Network Solutions is Utter Garbage, and recently, Guaranteed Value vs. Value Assessments). This post, dear readers, is yet another.

It was time to trade in my old refrigerator for a new one. Naturally, my chief concerns were price and delivery, however—being the tree-hugger that I am—I also wanted to find an appliance that qualified for at least a 20% rating above the Federal Standard. To my surprise/excitement, I learned that Sears.com rewards customers by providing a $75 discount for compliant appliances and a $100 discount for those that were at least 25% beyond the Federal Standard. Their quixotic calculator is attached for your befuddlement, if not amusement.

The day the refrigerator arrived, I mailed off the rebate forms to the New Jersey Clean Energy Program, the same forms that are prominently displayed next to the refrigerator on Sears.com. Three weeks later, just under the cut-off for when the application should be processed, I received a letter from the energy program informing me that of the vague and disheartening denial that I was disqualified due to “invalid retailer participation.”

In calling the program, they promptly sent me to the number for Sears.com customer service. Customer service sent me to the MySearsRebates.com customer service crew, who informed me that they only handle rebates on delivery. They recommended that I contact the clean energy program again. Once again, I contacted the New Jersey Clean Energy Program who informed me that I should speak with a representative at Blue Appliance Crew of Sears.com. I contacted them a second time and the representative took down my information and promptly said she’d handle the issue for me. After a half hour on hold, and without my knowledge or consent, she simply transferred me back to the MySearsRebates.com representative that I’d spoken to a half hour before. He, frustrated, provided me with the phone number for Sears National Center. “We do not handle these rebates, sir,” he said in a curt tone.

In contacting the Sears National Center, a sweet woman with a southern accent apologized for my run-around and told me she would help me with my issue. She took my information again and placed me on-hold, returning to inform me that she’d been told that this must be processed through my power company, PSE&G. This is when I started getting a little irritated. I asked her to contact PSE&G directly, while I waited on-hold. She did, and returned to tell me that PSE&G informed her that she should contact the New Jersey Clean Energy Program. I asked her to call that number, and while I waited on-hold, I shook my head at the rhetoric in simply trying to receive the rebate that they had, previously, posted as an incentive to use their services. The representative returned saying that she was told the same thing that I was told. I asked her to call the Blue Appliance Crew and she returned telling me that she was transfered to the “Sears.com Personal Shopper” number, rather than a rebate representative. She was given an additional number that customers aren’t privy to, a number for processing rebates when all else fails. After calling that number, she was told that it would not connect to a representative and made the recommendation that I be transfered to an “offline” team to look into the case further.

While I enjoyed the hold music, over the last hour, I was able to share this story with you. The case is still unresolved, though they promised a callback in 1-2 business days. When this happens, as I’m sure you know, the chances of a callback are truly hit-or-miss. I requested the representative’s identification number and a case number for my call. I also provided two phone numbers and an email address to ensure I receive a return call. Lastly, I requested that the representative leave explicit notes within my case of the revolving door that describes my journey into the world of Sears.com Customer Service.

If you’re on the edge of your seat, anxiously awaiting resolution to this harrowing tale, I must recommend that you do not hold your breath for a swift and rewarding resolution. More later…

END_OF_DOCUMENT_TOKEN_TO_BE_REPLACED

When I travel to far-off lands, I’m bemused by the oddity, the other-worldliness of ordinary grocery market shelves, where indigenous patrons must think I’m insane. I remember quite distinctly a flock (troupe? herd?) of Swiss interns—colleagues at my first dot-com gig out of college—marveling over an entire aisle of white bread. Personally, I thought they were verrückt. However when I spent a vacation in Bërn, I clearly couldn’t find one loaf of wonder bread at the nearest Coop or Migros. END_OF_DOCUMENT_TOKEN_TO_BE_REPLACED