My biggest frustration with online galleries has always been search- and sort-ability by photo contents. The introduction of captioning to Picasa and tagging to Flickr did little to quell my disappointment. Sure I could view a tag cloud of photos that were tagged with the word “New York” or “Mom”, but I couldn’t easily sort by who was included in the photos. And, beyond that, my sojourns to social events would all be tagged after the event and not the containing people, unless I went through each individually and tagged the person or people for each picture.

For instance, this summer I went to Duluth to share in Gretchen and Jay’s wedding. Coming back, I had about 600 photos tagged “Gretchen and Jay’s Wedding” where only half actually featured Gretchen or Jay. The remaining photos were of their friends and family and the beautiful environs of Duluth. So any user interested in seeing pictures of Gretchen or Jay or both would need to sift through 600 photos to see them. And worse, if the tags were part of Flickr’s tag cloud, the user would sift through thousands of photos that matched “gretchen” or “jay” or “wedding”. A search would undoubtedly show my brother’s wedding, or pictures of other Jay’s in my life (as I only know one Gretchen) or pictures of the bride from college.

Facebook, and now MySpace, introduced “People” tags where you could search for your friends’ labels in pictures. As this was a step in the right direction, it contains two major flaws:

1. If the person wasn’t a friend on Facebook, they were unlinked. Even if they show in multiple photos, there was/is no way to see them all.

2. You still have to tag each person/photo separately, creating a long and laborious task for any shutterbug.

So when Google announced the launch of Name tags for their photo gallery Picasa, I wasn’t too optimistic. I quickly learned how wrong I was.

The new “Name Tags in Picasa Web Albums“, once enabled, runs an algorythm to (as Google may say) spider through your entire online gallery searching for faces. Upon exacting all the faces in your photos—even the blurry, distorted, or semi-hidden ones—it runs a second algorythm for facial recognition. Then it groups the recognized faces into categories and presents you with a list of results. This is when it gets interesting.

Picasa then asks you to “Name” the group, checking or unchecking facially-similar people that don’t belong in it. It presented me with over 300 pictures of Gretchen (where she smiled showing her pearly whites). In the group, there were a few stragglers of her mom, sister and aunts. After unchecking the non-Gretchens and tagging them all as her, it presented me with the stragglers to individually name as her female family members. With one click, I had already labeled almost all my pictures of her, and most of the photos from her wedding. This accomplishment would’ve taken hours, if not days, on Facebook and Flickr.

As you go through the categories, Picasa suggests your predefined names based on closeness of facial recognition and (I believe) known associates in photo shoots.  I found it fascinating as it went through the categories that it consistently presented familial matches for photos. For instance, the next category might be all of Gretchen, but this time, smiling with her mouth closed. The first recommendation was “Gretchen”. The second was her mom, then her sister, then her aunt. Picasa not only grouped photos by 1) facial recognition, 2) pose, 3) match to previous galleries, but also found her family members as being possible matches rather than recommending that the photos contained someone else from the same photoshoots. This takes “you have your mother’s eyes” to a whole new level as algorythmically and mathematically, it is proven!

What’s even more stunning is that, being a twin, Picasa only once suggested that a photo of my brother was a photo of me. And while I hear, almost daily, “you look like your brother,” Picasa looks at these photos with a more discerning eye. There are over 1000 photos of my twin in my Picasa gallery, and yet the Name Tags engine knew the difference—even when I had a goatee and my brother didn’t, even when my brother had a goatee and I didn’t, even when I, myself, had a hard time keeping us separate.

Name tagging photos took about an hour as I have a ton of pictures online. As I proceeded forward, however, the recommendations for names grew more and more exact. And it ended up being mostly a click-fest rather than a piecemeal naming exercise.  I don’t even want to think of how much time this would have taken on Facebook or Flickr. 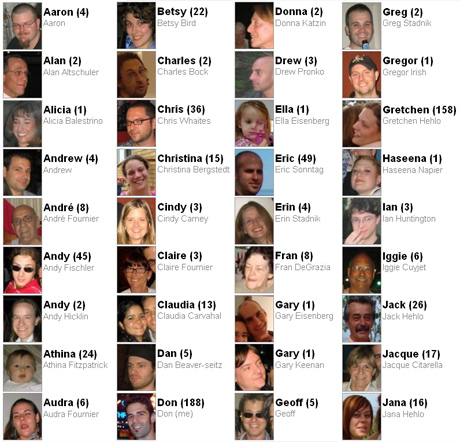 Now, not only can you search by gallery/photoshoot, but also cross-filter with the person. So if you want to see all pictures of Gretchen, specifically, at Gretchen’s Wedding, you can see just the 158 photos that match your request, instead of sifting through 600 photos of a wedding, or 300 photos of Gretchen from various galleries.

To make it even cooler, removing groups of photos in the past was nightmarishly tedious. For instance, if you break up with someone and you want to remove all photos of them, you had to pore through the galleries that you were together and individually check those photos for deletion. It’s even more difficult when you’re browsing galleries by thumbnail and had to identify a 16 square pixel person in a crowd from that thumbnail. Now, Picasa lets you click on the person to reveal every photo they’re in and then click Delete!

Picasa, naturally, shows you a representative set of people included in your photos on the Public Gallery List page: 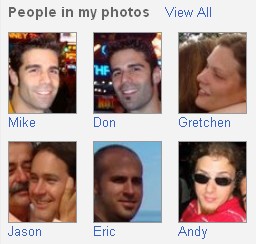 but also shows you who is included in each gallery as you click inside: 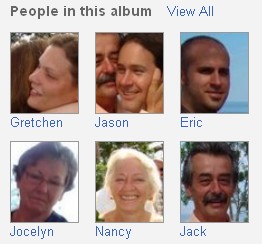 And the name tags uses the same hover div function as you’re probably familiar with in Flickr and Facebook, too: 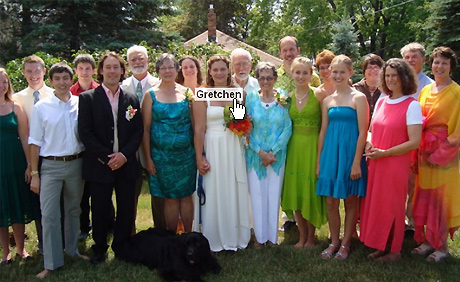 There are a bunch of other features with name tags too. You can hide them in public albums and/or unlisted albums by default. You can share them with others. You can add an email address so users can be notified when they’re name tagged. And I’m sure this is just the beginning.

If you have Picasa, give it a try. I’m sure you’ll be more than impressed!

One Reply to “Name tags in Picasa Web Albums”