My father sent me a forward of this guy’s work. It’s quite amazing. Unfortunately, the pictures that I found online are only about 500px wide and I’m sure they don’t do Mr. Mueck’s artwork justice. Also, unfortunately, he had an exhibition at the Brooklyn Museum (details below) that was only there until February 4, 2007, so I missed it. Anyway, take a look.

Ron Mueck is a London-based photo-realist artist. Born in Melbourne, Australia, to parents who were toy makers, he labored on children’s television shows for 15 years before working in special effects for such films as Labyrinth, a 1986 fantasy epic starring David Bowie.

Mueck then started his own company in London, making models to be photographed for advertisements. He has lots of the dolls he made during his advertising years stored in his home. Although some still have, he feels, a presence on their own, many were made just to be photographed from a particular angle – one strip of a face, for example, with a lot of loose material lurking an inch outside the camera’s frame.

Eventually Mueck concluded that photography pretty much destroys the physical presence of the original object, and so he turned to fine art and sculpture. In the early 1990’s, still in his advertising days, Mueck was commissioned to make something highly realistic, and was wondering what material would do the trick. Latex was the usual, but he wanted something harder, more precise. Luckily, he saw a little architectural decor on the wall of a boutique and inquired as to the nice, pink stuff’s nature. Fiberglass resin was the answer, and Mueck has made it his bronze and marble ever since.

Ron Mueck’s work became world-famous when a poignant sculpture of his dead fathers small, naked body caused shock waves in the Royal Academy’SSensation exhibition in 1997. The attention to detail and sheer technical brilliance of his figures are incredible, but it is Mueck’s use of scale that takes your breath away.

His work is lifelike but not life size, and being face to face with the tiny, gossiping Two Women (2005) or the monumental woman In Bed (2005) is an unforgettable experience.

Mueck’s huge 4.5m crouching Boy was the centerpiece of the Millennium Dome in London and of the Venice Biennale in 2001. The artist’s work is becoming ever more intriguing, ranging from smaller-than-life size naked figures to much larger, but never actual, life size Consequently his hyper-realistic sculptures in fiberglass and silicone, while extraordinarily lifelike, challenge us by their odd scale. The psychological confrontation for the viewer is to recognize and assimilate two contradictory realities. 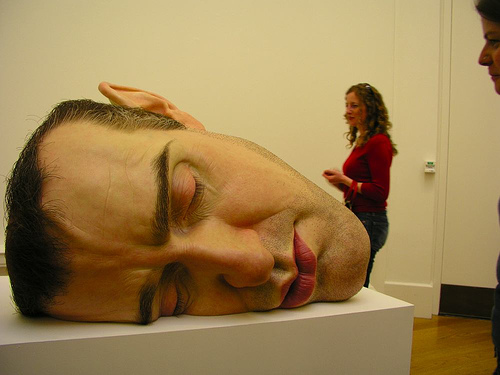 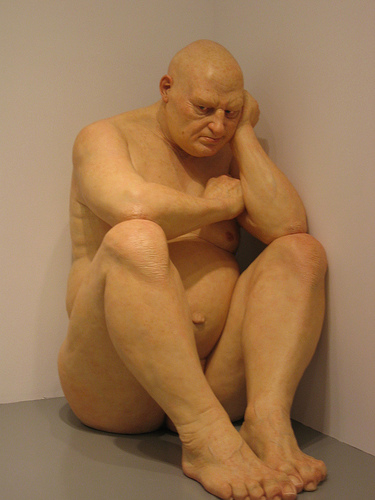 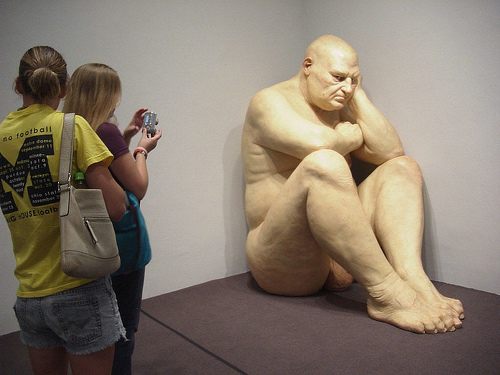 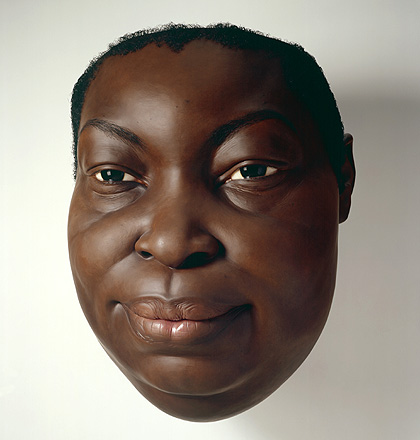 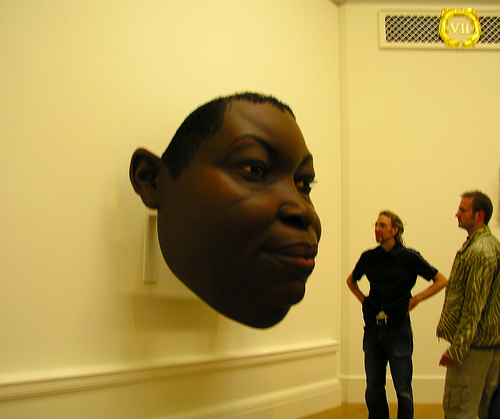 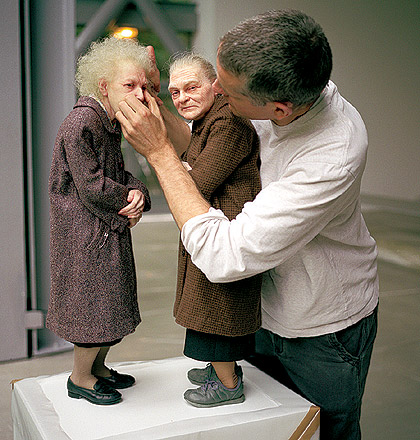 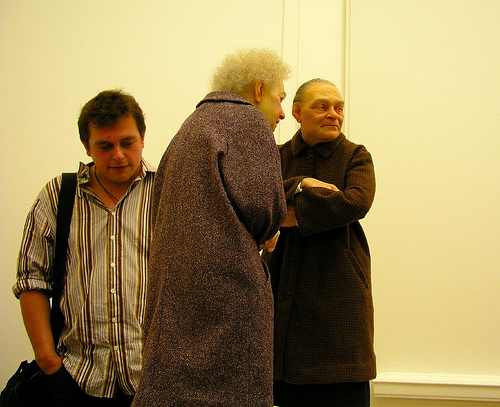 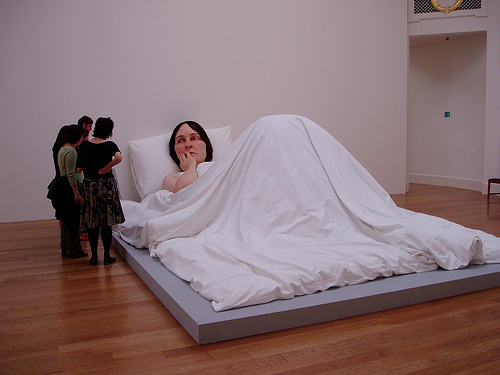 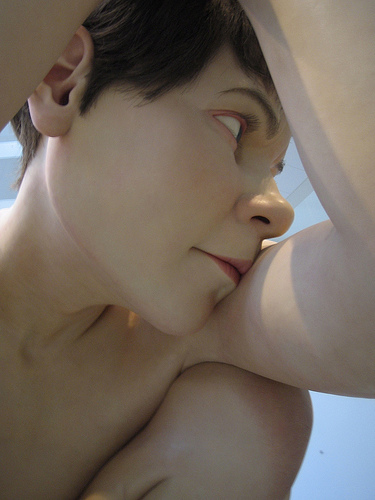 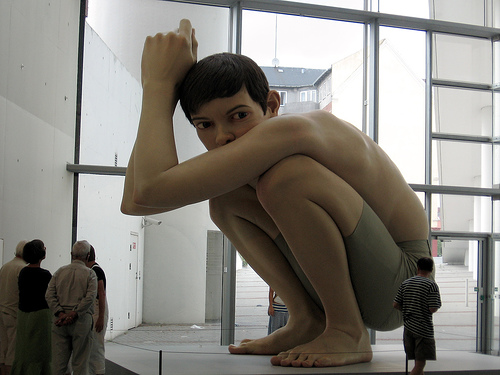 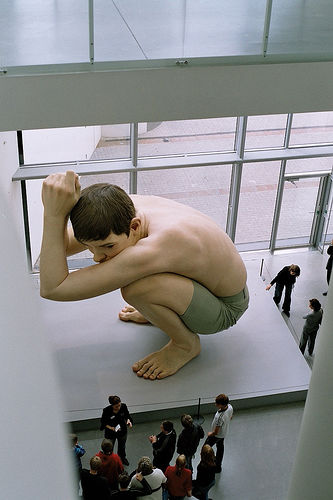 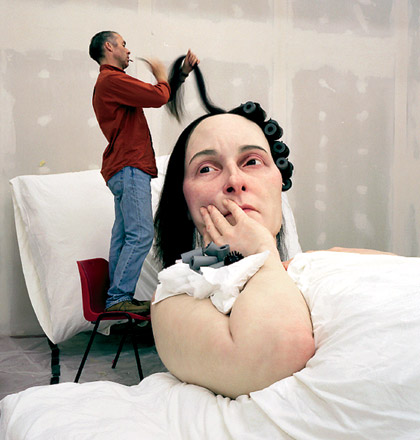 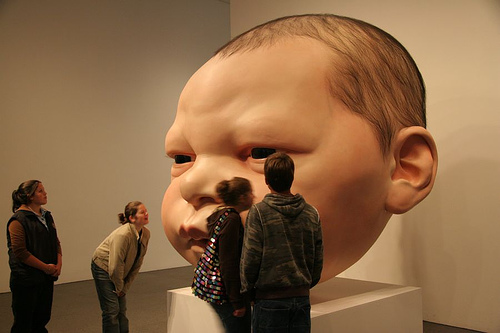 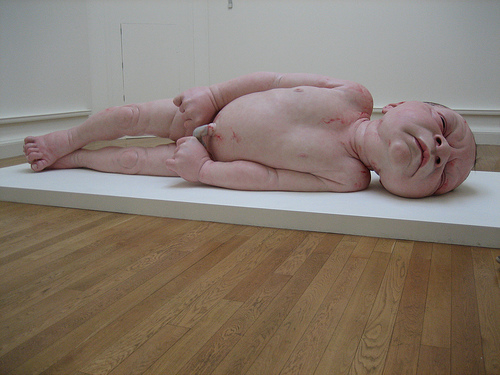