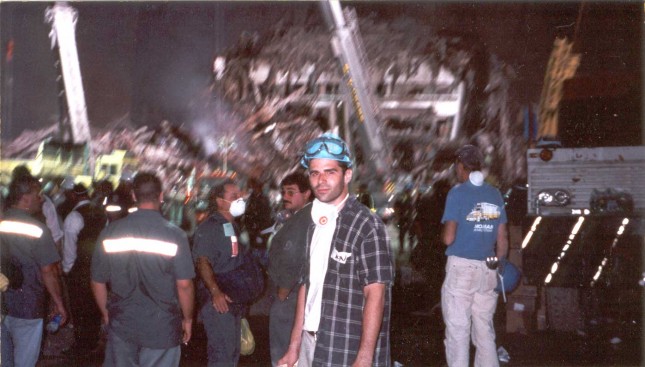 I’d debated putting this post up for a long time. In fact, for the last decade, I was convinced that it had no place in a personal blog. Any reference to those terrible events, commingled with announcements of my studio‘s successes and incessant ramblings about the decline of customer service, just seemed to be a flagrant rodomontade more than a eulogy. In light of the barrage of articles commemorating the ten-year anniversary of the tragedy, the shameful exposure of Vincent Forres and the 9/11 profiteers, and the revelation that I now have a 19% increased chance of developing cancer, I’d begun to re-evaluate this position.

This week, I shared my concern of cancer to a dear friend, a friend that I’ve known since 2003, and he was surprised to hear that I even volunteered.  To someone with whom I share almost everything, it seemed equally surprising to me that I hadn’t mentioned it either. Maybe you should write something, he said. His suggestion was probably prompted by the concern for why I’ve remained silent for the last decade. And my understanding of this is ultimately what has lead to this post. 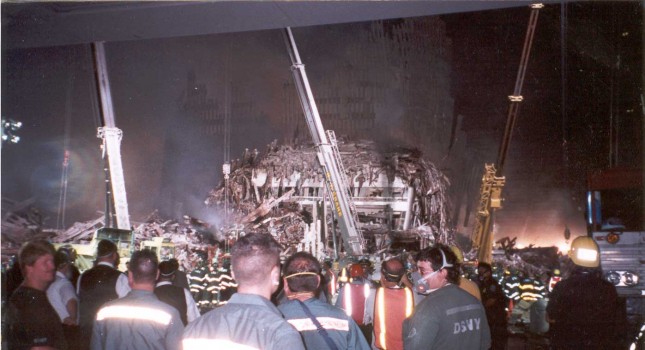 The above pictures were taken on September 13 at around 1 a.m. and are facing east. I don’t remember the name of the photographer, unfortunately. In the photos, I was under the World Financial Center (WFC) viaduct (that ran between 1 and 2 WFC) which withstood the impact. The rubble of tower two is in the background. You can see a slight outline of the outer shell ominously standing amid the smoke and dust.

My brother and I volunteered for about 22 hours each over the course of the 12th-15th. Along with hundreds of others, we went from location to location trying to help. We were able to: find and deliver food and supplies to medical personnel outside St. Vincent’s Hospital in the West Village, go to donate blood at the Red Cross on the Upper West Side, stock trucks full of water and food in Chelsea piers for delivery to Ground Zero, unload medical supplies at Stuyvesant High School where the triage was set up for survivers and firemen, organize a brigade of people to unload ships coming in from New Jersey behind Two World Financial Center, set-up a food/sleep station for tired and hungry workers, fill and move over a hundred bags of garbage and debris.

I remember when someone would be found, firemen would stop working and everyone would just watch, praying that person was okay. When they were alive, the volunteers would erupt in an enormous amount of cheering and clapping and whistling. When they weren’t, it was completely silent.

After I decided I couldn’t take anymore, I took one last look and left by myself. I remember a few firemen walking along West St back to the high school. One that I recognized from walking past so many times was crying. I said “thank you” to him and kept going. It wasn’t until I was a couple yards past him that I heard him hollar back a thank you to me. Until that point, I didn’t think I really had much impact. I didn’t do anything special, really, just moving trash and cleaning. It could’ve been anyone. The fact that a FDNY fireman thanked me was really, really touching. His tears, I confess, were a bit contagious.

I rode a bus back at 2:30 in the morning with a couple dozen firemen as the subways down there weren’t running. It made local stops as it went up to Harlem. As people would get off they’d mess up my hair and say things like “nice work today, kid,” and “see you tomorrow morning at 6.”  They let me keep the hardhat.

A friend of mine called me lucky for being in the area and able to help. I suppose I was. I knew a lot of people far away that expressed feelings of helplessness, wishing they could do something. Nearly 10 years have passed since that week and the feeling of helplessness still lingers. I’ve given friends tours of lower Manhattan and the areas around Ground Zero and quietly reflect on the time I spent under the World Financial Center viaduct. Nostalgia has faded most of the horrific things I saw that day and replaced it with a pride for being able to do what others couldn’t by simply being so close. If I close my eyes, I can still see the debris, still hear the echos of the cheering firefighters when they rescued someone. It’s something that I hope I’ll never forget.