Ever since FiOS lines were installed in Hoboken, Verizon has been fairly aggressive about getting people to switch over from Optimum. They were in the middle of a massive lawsuit that year—over a free flat-screen TV offer, phone bill cramming, pension cases, or something…who can keep track?—and they still had people going door-to-door at least once a month.

I was happy with Optimum Online, despite local speed-tests proving my connection was sub-par. Each year, I’d call them up to have them reluctantly reduce my triple play (phone, internet, tv) to the introductory rate of $99/mo and each year they’d dutifully comply.

I’ve had no complaints with Optimum, but the pure and simple fact is this: I’m spending $99/mo on Internet alone. I never watch cable and honestly cannot remember the last time I did. I have the phone service for business, but Google Voice would easily eradicate my need for a landline. So that leaves me spending 3x as much as I ordinarily would for simple internet access.

But what keeps me with Optimum Online is their Optimum Rewards, or, more specifically, one Optimum Reward. It’s the only value I’ve found from their customer loyalty program and, incidentally, the only one they’re no longer offering. I registered my disappointment on the Twittersphere: 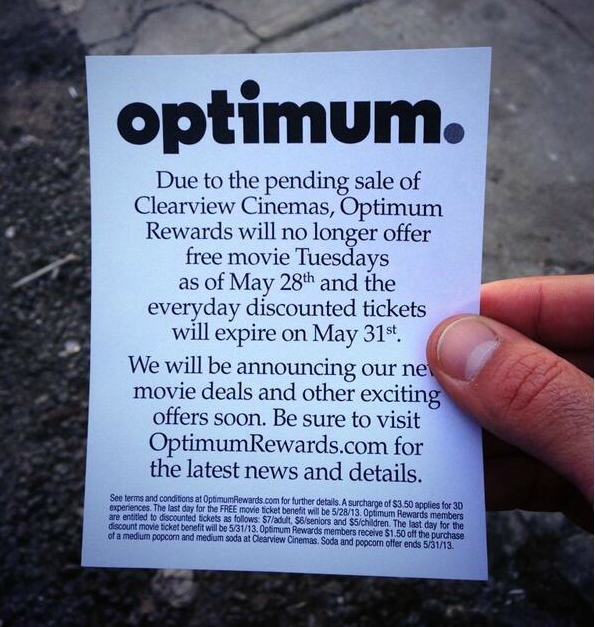 This image was coupled with the tweet (note the @ to Verizon and Optimum):

Within moments, I received responses from both. Behold the power of Twitter: 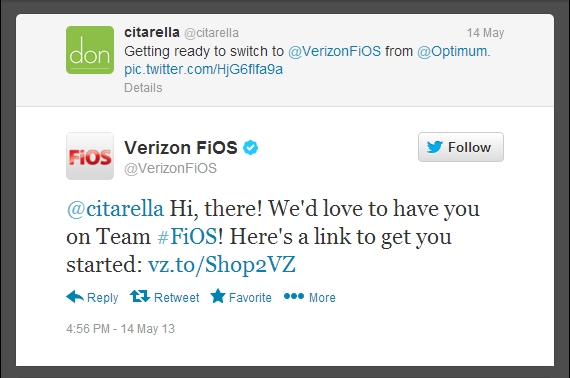 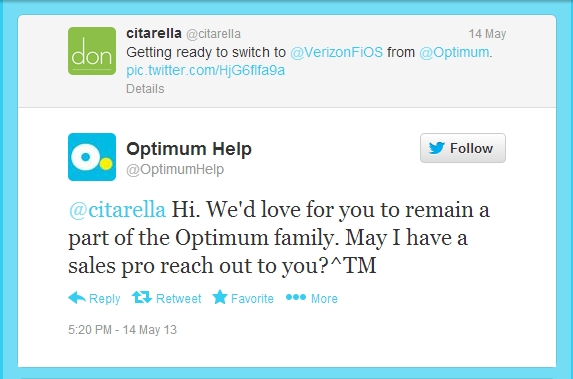 Notice they’d both “love” to have me on the “team” or in their “family.” This is exactly the purpose of such a powerful tool: connecting customers with service providers. It’s the reason SwissMiss broke from her typically professional platform to scold KitchenAid, which I empthatically applaud. It works because it’s a public forum. If you @Tweet someone, the public sees it, retweets it, and spreads your message across the web to be indexed and searchable with the strongest keywords and #hashtags possible, the name of the offending business, and the names of their competition, succinctly and poignantly broadcast to the world in 140 characters or less.

In the past, what could you do? Call and leave a complaint in the customer hotline oubliette? Report a problem to the Better Business Bureau? Start a blog lambasting a business’s lack of matched commitment? Free enterprise is a competitive world and, quite frankly, Verizon’s upload speed and matched triple play rates should be enough to tip the scales in their favor. But two free weekly tickets equates to a $96 monthly savings in my area, where movies cost a minimum of $12/ticket. The $99 price tag for a triple play is quickly reduced to $3/month, give-or-take. To cinemaphiles, this easily justifies a slower connection, rolling outages, and subscriptions to 2 services I rarely use.

If a service provider like Optimum truly provides optimal service, there would really be no need for Optimum Rewards; their offering, reputation, and customer care should be enough. While Verizon’s offering and price-point are greater, their reputation (born from the ashes of the MCI Worldcom debacle and reared through a litigious breadcrumb trail) and customer satisfaction record are poor.

In fact, in 2010 two upstairs apartments subscribed to Verizon, who came out, drilled multiple holes in the façade of our building—which we just paid $7,500 to weatherproof—and left untidy, precarious clusters of cables drooping in front of windows, obscuring our view and decimating our curb appeal. I’ve complained to no fewer than three representatives of the company and all three confidently affirmed that the leaking eyesore would be resolved, quickly. To this day, they’ve done nothing.

So let’s see the value of customer loyalty programs in action. This week, I’ll call both to see how badly they’d love to have/keep me on the team and in the family, or if their quick and sympathetic retweets were ultimately a public relations trick to assuage my insignificant, though permanent mark on Twitter’s public forum.