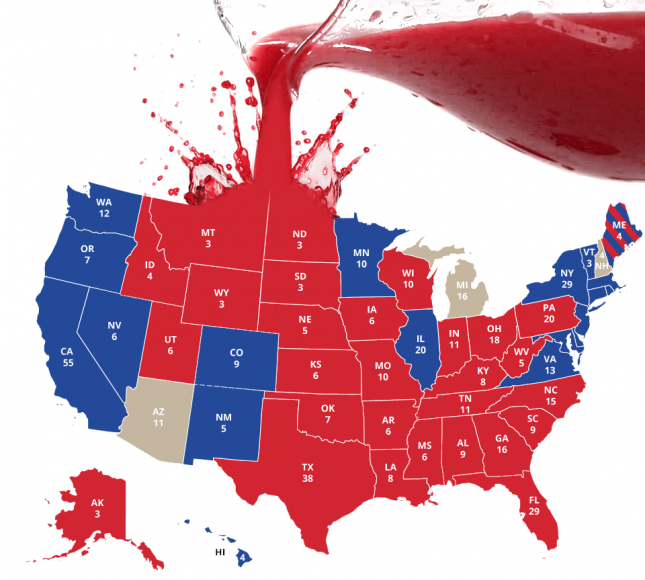 Last night at 2am, I left Rockefeller Plaza struggling to identify an ache inside me that I hadn’t felt in almost a decade. I kept asking my brother: “how could we be so deluded?” His response was that we weren’t the ones that were deluding ourselves. I understand what he meant, of course. Despite Hillary winning the popular vote, just as Al Gore had in 2000, she didn’t win the election. But this wasn’t the delusion I was feeling.

I grew up in Michigan, a swing-state, in the Catholic Church among disenfranchised, unemployed men in the automotive and pharmaceutical industries. I’m white, healthy, and fortunate enough to be comfortably in the middle class. I was raised to respect my mother, a hard-working, underpaid daughter of a conservative family. I respect her right to choose. I feel compelled to donate to charities that promise better lives for impoverished families, malnourished and homeless children, retired veterans and senior citizens seeking comfort in their old age, but, in truth, I rarely do. Instead, I sign petitions for the Sierra Club. I cherish family reunions that steer clear of the topic of politics, assuming we all share the common, Christian values of fellowship, charity, and forgiveness.

And when last night’s numbers tumbled in, I started to wonder where those common values were when it was time to cast our ballots. Since the primaries, I’ve had conversations with friends and family about these ideals and how Hillary Clinton embodies them more than any other candidate in this election. I never expect to match a politician’s stances entirely and I’ve certainly differed on some of Hillary’s (and, to be fair, Obama’s) views. I believe, in those cases, a president needs to listen (respectfully) to their constituency and evaluate how best to represent the American people. Just as in a relationship: if opinions differ, both parties need to work through disagreements and find compromises where necessary and help each other better understand the importance of their beliefs and decisions.

There are some cases where I feel there should be no compromises, however.

Despite being Catholic, I’m pro-choice. I don’t believe the government should meddle in theological debates and believe the decision should be left in the hands of the people directly affected by the pregnancy. This includes their well-being, weighing the hardship of the prospective mother and child, and her conscience. I vote for candidates that respect women.

I believe in equality and respect to all genders, races, religions, orientations, and political affiliations. I believe in diplomacy and pacifism in the face of violence, tolerance in the face of ideological differences, and admonition and education in the face of bigotry. And while I believe in forgiveness, I believe strongly in life sentences of atonement over capital punishment.

These beliefs cost money. As I support them intrinsically, I believe in paying an appropriate share to support them financially. I vote for candidates that ensure these funds are levied minimally and proportionately, and those that commit to spending them, wisely. At the very least, I vote for the candidate that pays their taxes and has the tax forms to prove it.

If, like me, people vote for the candidate that best matches their values, I truly believed that, amongst my fellow Americans, I was in the majority. I thought I shared these values with most of my peers and my family.

In the early 2000’s, when the Clintons moved to Chappaqua, I was visiting my elderly cousin in Hudson, New York. He was livid that Hillary was a State Senator. When I pressed him as to why, he responded “I won’t vote for her because she’s a cuckolded bitch.” Granted, the man was in his mid- to late-80’s and the world he grew up in no longer exists. People don’t vote based on trivialities like that, I informed him. They vote based on stances (I would later revisit this argument with my fiance’s father who noted that a disproportionate number of Philadelphia voters showed up at the polls for Obama’s election simply because he was black). He laughed and shook his head with a look of warm pity.

This summer, when I spoke with people and lauded Hillary’s illustrious career working to support women and children (eliminating the pay gap, making maternity leave mandatory, improving women’s healthcare coverage, and pushing for stricter sentences for rapists, child molesters, and sexual assaulters), it was more often than not women that renounced her the most. Curiously, they would respond with shouts of treason and guilt from email-gate (despite being found innocent by FBI Director Comey, twice) and her inability to maintain her husband’s fidelity. They didn’t, however, address the issues of women and children. Needless to say, I could again hear my cousin’s voice in my head.

So when I felt that ache last night, I had to take a step back and truly consider who had been deluded. Despite Hillary winning the popular vote, current poll results show that 59.5 million Americans voted differently than I did. It made me realize that slightly less than half the voting population—including close family members and loved ones—doesn’t share the fundamental beliefs that, in my mind, are the cornerstones of the United States of America. Maybe my cousin was right. Maybe it was my version of America that truly didn’t exist, not his. Maybe it was me that drank the Kool-Aid, after all.

It is this realization that makes me reconsider my own beliefs. If—in order to be an American and excel in this country—I need to emulate the man that almost 60 million Americans propelled to the highest office in the land, then there’s a lot that I’ll need to change about myself.

I’ve never sexually assaulted or groped a woman. I don’t believe women should be punished for having abortions. I have friends who are Muslim, and Muslim-American, and wouldn’t advocate for shutting down mosques, keeping a system to track Muslim-Americans, or calling for a ban on Muslims entering the US. I have friends who are Mexican, and Mexican-American, and know they’re not rapists and drug dealers. I have friends who are Jewish and condemn anti-Semitic remarks and attacks. I have friends who are black, believe black lives matter, and know that our continued pursuit of equality and desegregation is not to stereotype and generalize. I would never fraternize with white supremacists or the Ku Klux Klan. I don’t believe walls are a way to fix the problems in the world. I would never resort to violence to solve disagreements nor endorse torture or waterboarding on someone who hasn’t been proven to be a terrorist. I would never make fun of people with physical disabilities. I would never call poor people “morons.” I would never say those suffering from PTSD aren’t “strong.” I know that Climate Change is real and it frightens me. I highly respect America’s military, veterans, and Gold Star Families. I pay taxes. I don’t believe in the death penalty as I know, in cases like the Central Park Five, those charged may later be exonerated. I have never been a plaintiff in a lawsuit. I’ve never been a defendant in a lawsuit. I’ve never filed for bankruptcy. I would never use nor threaten to use nuclear weapons. I don’t judge a person’s character based on their age, beauty, or weight. I’ve never stolen from a charity or a terrorist recovery fund, nor would I use charitable funds for personal gain. I believe Americans have the right to bear arms, provided they pass background checks, psychological exams, and have no history of violent crimes. I love my country.

But, maybe it’s time I reconsider.

One Reply to “Who Drank the Kool-Aid?”