Over a year ago, I posted about ZDNet’s 10 Most Annoying Programs on the Internet, where Apple was ranked #2, forcing users to install Quicktime with each upgrade of iTunes and also pre-selecting that the user wanted to install Safari and Mobile.me onto their computers as well. I’m a strategic marketer, so I understand the logic behind it. More than half of the users probably just click “Continue” without reading what they’re installing. It’s the same guiding principle behind bundling installers with Yahoo! and Google browser toolbars.

Anyway, I was happy to see that after a year of Apple hounding me to install Mobile.me, a service that I find worthless and irritating, they finally unbundled the option in the iTunes v9.0 installer. They’ll probably never stop pushing Safari on us PC users until it goes the way that MSN Explorer went.

Lo and behold, however, I’m now prompted with installing the iPhone Configuration Utility. It’s bad enough that at any given time I’m forced to have the Apple Mobile Device Service, the iPod Service, iTunes and the iTunes Helper running, but now they want another service worthless to HTC TouchPro Windows Mobile phone users (such as myself) running on my system, stealing memory? Thank you Apple for confirming your place among the top ten most annoying programs on the net. ZDNet, I strongly urge you to give Apple the credit they’ve worked so hard for: make them #1! 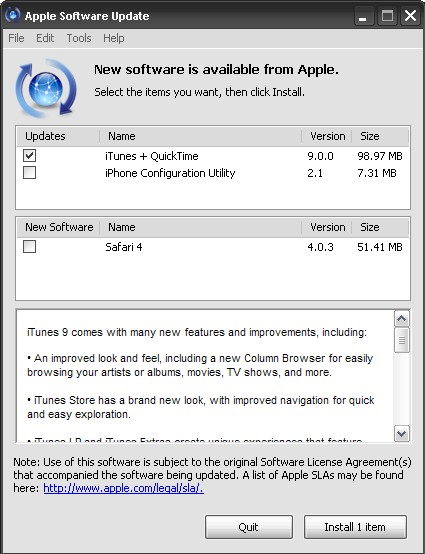