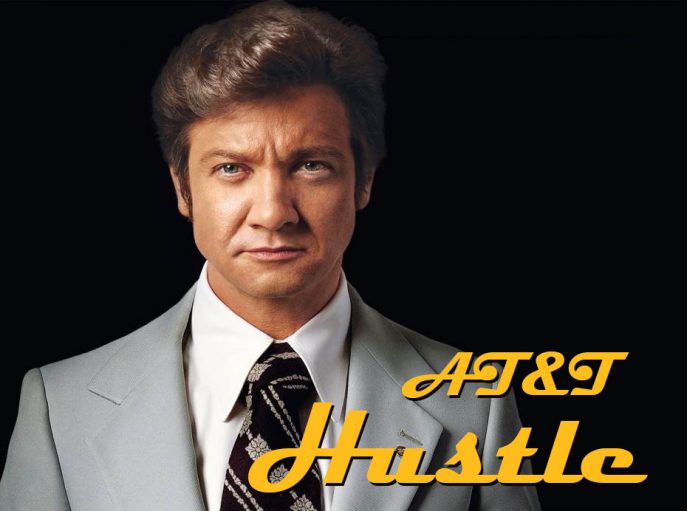 This past weekend, on a trip to see my girlfriend’s family for Father’s Day, my phone was stolen. Or lost, perhaps. I really don’t know how it came to be out of my possession, but it really doesn’t change the fact that I was without a phone. In truth, I’d planned on upgrading my Apple iPhone 5, anyway, as I’d been out of contract for a few months. However, despite the manufacturer’s planned obsolescence and my excitement for new-fangled gadgetry, I still couldn’t see myself upgrading unless I absolutely needed to. I despise contributing to the e-waste problem and conspicuous consumption and teetered on the fence between keeping the phone and turning it in to AT&T for a paltry exchange payment.

Regardless, I’d spoken with my girlfriend’s father and he shared with me the details of AT&T’s Next Plan. If you’re unfamiliar with it, the gist of Next is this: AT&T gives you a new phone in exchange for sales tax and an increase on your bill for the phone’s entire cost divided by twenty-four months (or 12-months, 18-months, or 30-months, whatever your preference). It’s fairly similar to Verizon’s Edge program.

I’d argued that it still seemed preferable to me to re-up a two-year contract and pay the $199 reduced rate for a 16GB iPhone 6. His response was that I’d still be paying the full cost of the phone ($699) as AT&T increases the monthly fees over the two year period to make-up the difference, and that if I’m paying the full cost of the phone anyway, why not keep the two hundred dollars and sacrifice a nominal financing fee? With this dilemma, I decided to wait until I returned to New Jersey so I could enjoy Jersey City’s economic stimulus 3.5% sales tax and see if the NJ Rail or SEPTA Lost and Found had located my AWOL Apple.

Jason, the Best Buy sales representative, assured me that AT&T Next was a much better plan anyway. He took a sheet of paper, laid it out length-wise, and wrote “Upgrade” on one side, and “Next” on the other. Beneath both columns, he wrote $100, the base cost for a 10GB shared data plan. Beneath that, he wrote $199 under the Upgrade column (for the cost of the phone) and $29/mo under the Next column (for 1/24 the cost of the phone at $699). Beneath that, he wrote $15 under the Next column, and $40 under the Upgrade column. “This is your per phone line cost on your plan,” Jason said.

Something was wrong. I had called-up my plan on ATT.com from one of Best Buy’s readily accessible floor models, and knew for a fact that the per-line fee was $15, and had been $15 for the last two years.

“AT&T discounted that fee after your two-year contract was settled,” Jason said.

I informed him that the fee had always been $15 and had two years of bills to prove it.

Well, if all plans are $15, why are you putting $40 as the per-line fee under the Upgrade column, and not the Next column.

“AT&T charges $40 per line unless you choose to upgrade using the Next program.”

Note: I had no intention of changing my service with them. I simply wanted to take advantage of the hardware upgrade that they’d notified me I was applicable to receive.

Now, not only was I confused, but I was a little angry. What it sounded like to me was that I was getting penalized for signing-on with AT&T for my second 2-year contract. It seems to me that loyal customers were not only NOT being rewarded, but they were being punished for their loyalty. Naturally, I’m no stranger to this unethical business practice. Optimum had lured me (and countless others) in for a $99/month Triple Play and continues to increase the rate to $140/month every year until I call, register my disgust, and get them to reluctantly agree to return the monthly charge to their “introductory rate.”

A quick side-note: Yes, the iPhone 5 was $199 total with no hidden fees to make-up the balance in my two-year contract. My phone bill has been $115 + tax for 2.5 years. They never increased or decreased the $15 per-line fee. They never increased or decreased the $100 10GB shared plan rate. The remaining $400 for the iPhone wasn’t buried under a mess of small print or collected by AT&T in minute increments over a two-year contract. The total cost of the phone was $199. 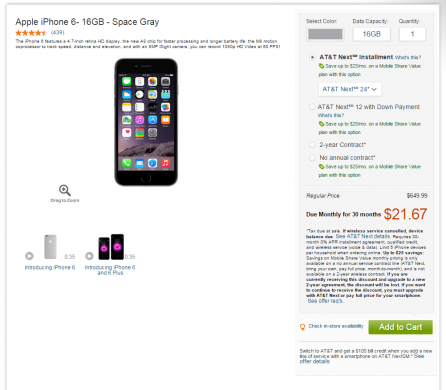 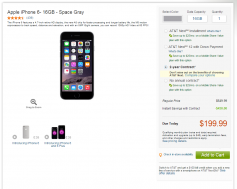 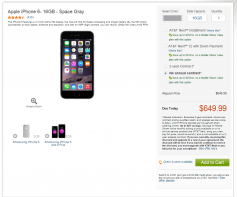 AT&T has given us three choices to buy a 16GB iPhone 6:

I left Best Buy discouraged, and walked to the Newport Mall where an AT&T store was located. I’d hoped they would: a) allow for 3.5% tax, b) satisfy my questions about the Upgrade vs. Next options, and c) have my phone in stock. They chose d) none of the above.

So I called the AT&T on Washington Street in Hoboken, spoke with a Retail Sales Consultant named Rianne, and asked about the phone’s availability. Not only was it there, but he said the store was also empty and recommended I come by.

Rianne sat me down and asked the normal questions (“Are you applicable for an upgrade? What’s your number, name, and last four digits of your Social Security Number? Which phone would you like? etc.). He then overwhelmingly recommended the AT&T Next program, which he assured me would save me over $200 over the two-year contract. I asked him to break-down the math and he seemed all-too-eager to do so. Rianne took a sheet of paper, placed it lengthwise in front of him, and wrote “Upgrade” at the top of one side, and “Next” at the top of the other.

It became obvious to me that this ritual was the result of some training exercise that corporate decided was mandatory for all Retail Sales Consultants of the company. I was angry. I couldn’t get a $199 phone like I (and everyone else in the world) had done before, even though I was “applicable for an upgrade.” I couldn’t get 3.5% sales tax. I couldn’t have my choice of upgrade options from Best Buy, my preferred vendor. And I knew my three choices were $649, $706, or $856, $450-650+ more than I was expecting. Ignoring the out-of-contract phone purchase, I considered the idea that when faced with those options, AT&T Next was a better choice, but only because it was cheaper. And it certainly wasn’t saving me $200 as Rianne had gloated.

“How on earth is this rewarding customer loyalty?” I asked him. He smiled and happily informed me that AT&T would graciously waive their self-imposed $40 activation fee for whichever option I chose. I gritted my teeth.

Now, here comes the rub: You must keep and pay for your phone for 24-months (or whatever duration of the Next plan you choose), or else AT&T will take it back. Despite paying more than an out-of-contract cost for the phone, you do not own it. Their logic is that you’re leasing the phone (like a car) from them and until you make the very last payment—even if it’s beyond the retail cost of the phone—it belongs to AT&T. Want to switch providers? The phone is theirs. Lose your phone? It’s still theirs. Phone stolen? It’s still theirs. And when you’re ready to upgrade at the end of your chosen Next period, they take your old phone back (one that you’ve more than paid for) and start the whole process over again with a brand new phone.

It was then that I realized that your plan won’t change if you simply replace the phone on it. While it may be an excuse—though in my case, it was true—you can simply bring a phone into AT&T, request a new/free SIM card, and have the phone activated on your plan. And as Rianne mentioned, the activation fee is waived. If you don’t have a SIM card, they’re required to give you one for free or you won’t be able to use their service.

So I went to eBay and found a dozen or so listings for 16GB AT&T Apple iPhone 6 phones, found one that was new and still in the box, bid $499, and won. I saved $150 off AT&T’s out-of-contract rate, $207 off their Next rate, and $357 off their Upgrade rate. And because the phone was bought on eBay, I paid 0% sales tax (not 7% in Hoboken, or 3.5% as it should’ve been in Jersey City). I still spent more than the $199 that I was expecting to spend, but saved a lot more than I could’ve if I bought the phone through AT&T and am happy to report that I’m no longer in contract with them and can leave at any time.

I highly recommend reading the fine print if you’re due for an upgrade and trying to ignore the maudlin grins of the sales representatives who seem all too excited to give you a financing deal in exchange for a fat commission check. Check the listings on eBay and look for those that specifically mention your carrier so you can get the correct radio for your carrier (CDMA: Sprint/Verizon or GSM: TMobile/AT&T). Don’t fall victim to a “UNLOCKED FOR ALL CARRIERS” message if the model of the phone is too new (It typically takes some time for the process of unlocking all radios on a phone model to become standard practice). And definitely don’t buy a phone from Craigslist as most of those devices are stolen and would be worthless (or “bricked”) if you tried to activate them.

If you have any questions about the above, don’t hesitate to leave a comment below or contact me on my shiny new iPhone 6.

3 Replies to “AT&T Next Hustle”